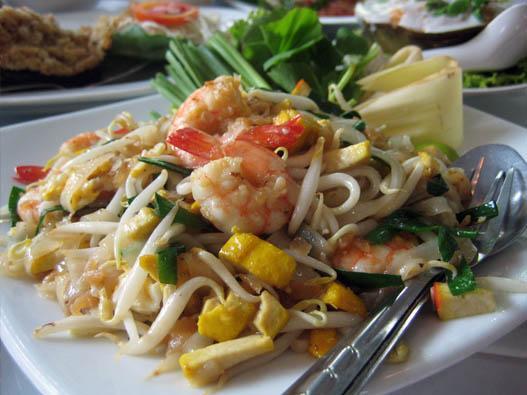 My quest to find the best Pad Thai and Pad Kee Mao dishes, has landed me in Baltimore, Maryland. When asking my friends where I could find the best Thai dishes, there were several choices, however two of the most noted were Thai Landing and Thai Arroy. Thai Landing, located in the historic Mount Vernon of Baltimore, Maryland, Thai Landing has become one of the go-to restaurants. Located in the trendy neighborhood of Federal Hill, Thai Arroy has become one of the hidden treasures.

So I set out on my journey to let my taste buds judge which Thai restaurant reigns supreme in this GrubOff: Thai Style.

Pad Thai has become a staple, and perhaps is one of Thailand’s most famous dishes. With that in mind, many strive to perfect the dish to ensure there is a balance between sweetness and consistency of the noodles. At Thai Landing, their equation needs minimal adjustment. The robust flavors and subtle sweetness of the noodles made the dish delectable. The mixture of eggs, vegetables, and chopped peanuts was ample but not overbearing. The noodles were slightly al dente, which allowed for the sweetness to be infused into the noodles, without being cloyingly sweet like a dessert. The tofu also was soft enough to allow the flavors to soak in, yet crispy enough to provide added texture to the dish.

At Thai Arroyo, there were many delicious attributes. The tofu was scrumptious, with a wonderful firm texture that was slightly crispy on the outside and chewy on the inside. However, the supporting players: eggs, peanuts, and vegetables were sparse. The star of the show was the noodles which softer than Thai Landing, however still packed a delectable punch. The dish was sweet without being overwhelming on the palate.

The winner is…Thai Landing for the sweet and savory noodles and the great use of the supporting ingredients, which made the Pad Thai a well-rounded dish.

The key to satisfying my drunken noodles taste cravings is merging spicy flavor with a chewy texture of the flat noodles. Thai Arroyo truly hit the mark for me. The noodles were cooked to perfection, with a firm but silky consistency. My plate was exploding with flavor, and I could have even handled more spice, yes when it comes to Drunken noodles, I like to leave the table panting for a beverage. The tofu again did not let me down, with the crunchy crust and flavor packed inside. I was dining with friends and we all concluded that the noodles were simply delicious. This was a dish that makes you eager to obey your mother’s advice: “make sure you clean up your plate!” And we sure did.

Across town, the drunken noodles at Thai Landing were also tasty however did not leave me with an overwhelming sense of satisfaction. The dish was spicy to my liking, however the texture of the noodles was softer and had a mushy consistency. The tofu lacked the texture that I was so fond of in their Pad Thai dish, instead it too was flaky and fell apart before I even had a chance to chew. So the dish overall was filled with great flavor, and the Thai basil truly enhanced the dish, but the consistency of the noodles was better suited for soups and I was not able to fully savor the spiciness of the dish.

The winner: Thai Arroy for the one-two punch of spiciness and texture