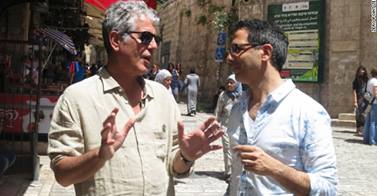 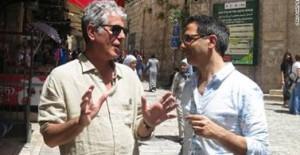 At GrubPassport.com, we were thrilled that Emmy-winning series Parts Unknown featuring Anthony Bourdian returned to CNN for its second season on Sunday night.

The second season saw the well-traveled Anthony Bourdain journey for the first time to Israel and Palestine.

Not unlike GrubPassport.com, the show uses food as a vehicle to discuss important issues such as people, culture and politics. In this episode Bourdain is guided through Jerusalem by Chef and co-author of Jerusalem:A Cookbook – Yotam Ottolenghi,

After a sojourning to the southern Israeli city of Eliat, Bourdain travels into Palestine where he spends time exploring small villages and digging deeper into Palestinian culture.

On his Journeys Bourdain met the Speed Sisters, the first all-female Palestinian racing team. The women ride on roads outside of the Israeli jail Ofer.

Perhaps most interesting to the GrubPassport audience was the meal found in a restaurant just 20 minutes outside of Jerusalem. The restaurant, owned by a couple where the woman is jewish and the man is muslim served Bourdain an exquisite vegetarian meal. The dish was prepared using fried eggs with peppers and fresh zucchini with apricots grown inside the restaurant’s garden. The meal reflected the chefs’ Israeli and Palestinian roots and their commonalities.

Laila El-Haddad, a journalist and author of Gaza Kitchen, was Bourdain’s guide throughout southern Gaza. He ate a dish of fried eggplant, tomato, caramelized onions, chicken, and rice with her family where El-Haddad explains the importance of cuisine to her culture noting “for me, being from Gaza, being a child of diaspora, I always thought food was a really interesting way to be able to tell the Palestinian story. Being able to discover this lost history, this Palestinian past. Plus the food is really damn good.”

El-Haddad also offered  Bourdain a watermelon salad that is cooked by wrapping unripe watermelons in aluminum foil, stringing them on a wire, and putting them in a fire. She notes that the grub in the region is so distinct that people living in Gaza City, only 35 minutes from where they sit, might not recognize the dish.

Parts Unknown is a great show that highlights the commonality in all of us and shows how food can foster understanding of peoples and cultures.