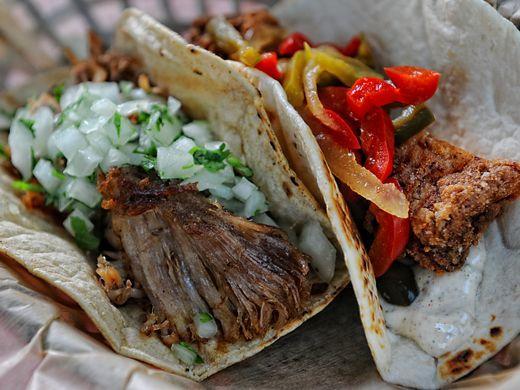 USA Today: 10Best: Places to get your taco fix on Cinco de Mayo

Move over hamburger, you have company. “The era of the taco has arrived,” says Aarón Sánchez, a judge on Food Network’s hit culinary competition show Chopped. The Mexican staple appears on menus across the USA, its popularity fueled by the versatility of the dish, which can be endlessly adapted and easily accommodates gluten-free, vegan or other dietary requirements. As Mexico’s Cinco de Mayo holiday approaches, Sánchez shares some favorite spots to order a taco plate with Larry Bleiberg for USA TODAY.

The Original El Taco
Atlanta
You’ll find tacos with a Southern accent at this taqueria with locations in the Virginia-Highland neighborhood and at the airport. El Taco offers unexpected garnishes like fried pickled jalapenos and buttermilk crema. Sánchez is particularly fond of the hickory-smoked chicken. “It’s a great combination using classic Southern methods,” he says. “It’s just a wonderful place.” 404-873-4656; eltaco-atlanta.com

Valentina’s Tex Mex BBQ
Austin
Sánchez loves the mesquite-smoked brisket taco served on housemade flour tortillas based on the chef’s grandmother’s recipe. “This for me is a fun taco. It embodies the ideas of Texas barbecue, which is meat all the way — and it’s family owned.” 512-221-4248; valentinastexmexbbq.com

Taco Trio
Portland, Maine
While New England might seem like an unlikely place to find authentic Mexican food, Sánchez swears by the goat tacos. The eatery even serves montalayo, which is a traditional goat dish made with organs cooked in its stomach with chiles and spices. “You don’t see it that often in Mexico, let alone in Portland, Maine. You have all the goat yummy bits cooked and hacked up and put on a taco. If you’re a goat lover, you can’t beat that.” 207-767-9055; taco-trio.com

Lolo
San Francisco
You’ll find fun taco variations at this funky and vibrant Mission District eatery. Sánchez is particularly fond of the Taco Tropical, panko-crusted shrimp served on jicama which takes the place of a tortilla. “It’s got all the components of a taco, but it’s rolled up with jicama. It’s awesome.” 415-643-5656; lolosf.com

Big Star
Chicago
Sánchez says the Windy City has some of the best Mexican food in the country, and he loves this Wicker Park spot housed in a former gas station. “The fish taco is down and dirty and beautiful. It’s crunchy and battered and has a nice acidic slaw, and that for me is where it’s at,” Sánchez says. “It’s elevated street food.” 773-235-4039; bigstarchicago.com