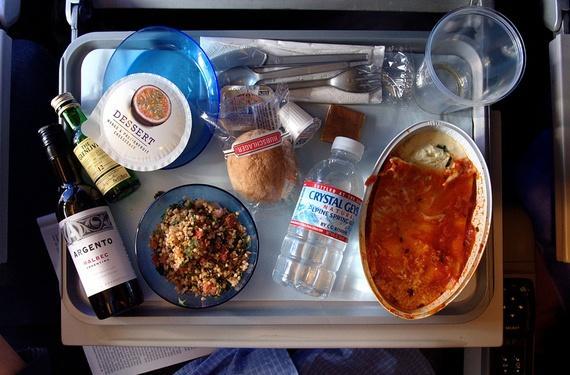 The Atlantic: Why Airplane Food Is So Bad

In the early days of commercial flight, when a transatlantic plane trip could take you 20 hours, there wasn’t much to do but read, nap, and eat. There was no in-flight movie to stare at and try to lip read because you refused to purchase headphones. You could look at the clouds, I guess.

To keep passengers entertained, airlines copied other modes of transportation—trains, boats—and turned to food. It was not uncommon, in the post-World War II era, to be served a multi-course meal on a flight. A fancy one, too. We’re talking carved roast beef, lobster, prime rib. Real glassware, not those plastic cups filled with those ice cubes that have inexplicable holes that we get now. Airlines were falling all over each other trying to offer special dining experiences to passengers.

“The other entertainment was, of course, to drink,” says Guillaume de Syon, a professor of history at Albright College who has researched the history of airline food. “These propeller aircraft were not always very reliable. If [passengers] knew they’d have to land in Reykjavik to have the engine checked, they’d be happy because they knew they could stock up on booze. It was not uncommon to have passengers come off transatlantic flights completely drunk.”

“It gets more expensive,” de Syon says, “flight technology gets better, it gets faster, and you can carry more people. You no longer have the same economies of scale. If you’re trying to feed 60 passengers, it’s one thing, but the moment you’re trying to feed four flights of 150, you have yourself a huge logistical problem.”

And thus, in 1952, economy class was born, and with it came a decline in the quality of the food for the masses. While at first airlines tried to compete by continuing to offer special food in economy class, the International Air Transport Association quickly stepped in to regulate what could be offered, to the point of reprimanding an airline for providing an extra roll of bread.

First class fliers, then as now, could still get an elaborate meal, since they paid for the privilege. But their enjoyment of their food likely declined with the advancement of airplane technology as well. Though old-timey flights were slower and bumpier, when it comes to dining, they had one distinct advantage: The planes weren’t pressurized.

Today’s planes, which reach altitudes of 35,000 feet or more, are pressurized so you only feel like you’re about 6,000 to 8,000 feet above sea level. This helps keep you, you know, breathing at those high altitudes, but it also numbs your taste buds, making food taste blander. Older aircraft didn’t fly as high, meaning the prime cuts of steak being served on those early flights tasted more like they would have on the ground.