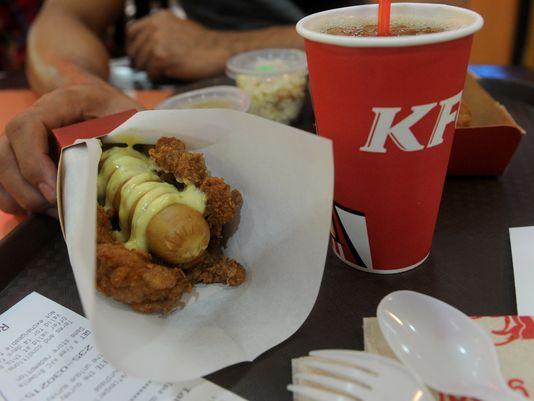 With Burger King’s advent of a hamburger dressed up as a burrito and Pepsi’s revival of its eerily clear cola, it seems like fast-food purveyors and soda bottlers are spending more time creating crazy new mash-ups in laboratories than fresh recipes in kitchens.

Hoping to break through the marketing clutter, bizarre combinations of otherwise familiar foods are coming faster than you can get through the drive-through.

With the “Whopperito” — Tex-Mex-seasoned hamburger meat, drizzled with melty cheese and wrapped in a flour tortilla — Burger King hopes it has another cringe-worthy hit that attracts more diners who find the idea appealing than turns off those who consider it revolting. The concoction comes from the same chain, after all, that crusted pasta in Cheetos earlier this summer to create “Mac n’ Cheetos.”

“It’s just to get peoples’ attention to come in to the restaurants,” says Alex Macedo, president of Burger King North America. While Macedo says sales get a boost from limited-time menu options, they’re “also important for keeping the brand relevant.”

Not to be left behind, PepsiCo is bringing back its own cult favorite, Crystal Pepsi — a strange elixir in which cola has the same taste as the familiar fizzy brown stuff but appears as clear as water. It returns to shelves this week. The brand even hosted a ’90s-themed free concert Tuesday in Manhattan to celebrate the soft drink banished from store shelves in 1994.

With social media chatter and a chance at going viral more influential than ever, junk food sellers face pressure to churn out unusual, sometimes borderline ridiculous, products in overdrive.