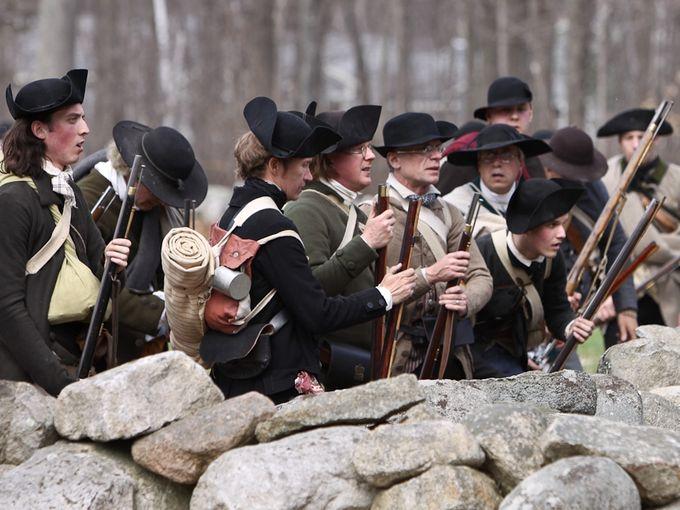 To comprehend the American Revolution, visitors must see Lexington and Concord, Mass., where it started. On Patriots’ Day in April, reenactors show how the battle unfolded. (Photo: NPS.gov)

History is best understood by walking the ground where it happened, says filmmaker Ken Burns. “You feel the presence of what went on before. We go to these places because we’re aware that the ghosts and echoes of an almost inexpressibly wise past summon us.” Burns, whose new seven-part documentary, The Roosevelts: An Intimate History, airs on PBS stations beginning Sept. 14, shares some favorite U.S. history sites with Larry Bleiberg for USA TODAY.

Visitors to Mark Twain’s house can sense the author’s presence, Burns says. “You walk into the room and you can almost see the cigar smoke. You feel that if you just moved fast enough you could see the white haired man.” The home’s Texas Deck porch is where Twain wrote much of Huckleberry Finn – not in Hannibal, Mo., he notes.

The park, which Burns considers “the most beautiful place on Earth,” played a key role in our nation’s attitude toward conservation. This year celebrates the 150th anniversary of the act signed by Abraham Lincoln that first preserved the area. It demonstrated that while our still-young country didn’t yet have great cities or cathedrals, it had unparalleled natural beauty, Burns says. “It was the Declaration of Independence applied to a landscape,” Burns says.

Bucket list tip: Hike to Vernal and Nevada falls and feel the power of the cascades. “You can get close and get in the roar and spray of them.”

Visitors can feel cultures clashing, meeting and merging in this focal point of American history. Visit to see New Orleans’ architecture, its wrought iron fences, and the Mississippi River “bringing all the foods and products of the hinterlands out to the Gulf of Mexico,” Burns says. “It’s not about gaudy Mardi Gras. It’s the Grand Canyon of American history, a station of the cross if you’re American and want to know its history.”

Bucket list tip: The French Quarter is meant to be explored by foot. Burns suggests starting in Jackson Square, then working your way through tiny streets and alleys by shops and galleries.

It’s remarkable enough that John Roebling’s span over the East River is still in constant use more than 130 years after it opened, but it also shows the energy, optimism and creativity of the age. “It’s one of the most gorgeous pieces of art and architecture of the 19th century,” Burns says. “In an age where most buildings were three or four stories, to have a place where seagulls flew beneath you was a thrill.”

Bucket list tip: By all means walk across the bridge. Starting from Brooklyn offers a stunning view of the Manhattan skyline.

To get to know Franklin D. Roosevelt, who Burns considers the 20th century’s most important president, you have to visit his home, located along a scenic stretch of the Hudson River. “It’s where he spent all his summers. It’s where he came to recuperate. It’s where his family had the fondest memories of being together,” he says. Exhibits at Springwood address the leader’s polio. “You’ll also see the braces he had to wear, the arcane torture devices, almost something from the Inquisition, and see his wheelchair.”

Bucket list tip: Make sure to visit Top Cottage, where England’s King George VI and Queen Elizabeth stayed in 1939 on the eve of the Second World War. Open May through October.