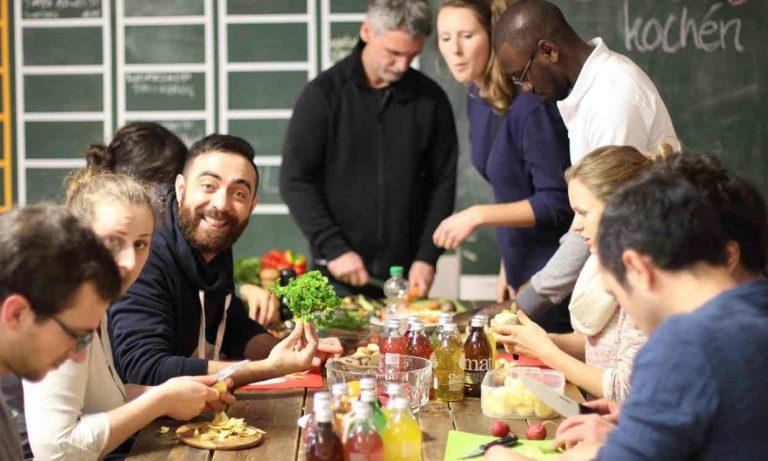 The Guardian: Berliners get an appetite for refugees’ cuisine

Lunchtime on a weekday at Alagami restaurant, in Berlin’s Neukölln district, is busy as usual. Waiters buzz around serving plastic plates brimming with orange-tinted saffron chicken pilaf, tabbouleh and hummus, and tall glasses of labnah yoghurt drink. Outside, a hijab-clad little girl zips past on her e-skateboard. The only difference between Alagami and the many other Lebanese and Syrian restaurants here is that all the employees are recent Syrian refugees.

While the influx of refugees from Syria, Afghanistan and north Africa into Germany has slowed, from almost 750,000 in 2016 to 37,000 in January and February this year (Berlin took in 1,733 of them), food has become an important way for refugees to connect with their host Berliners.

“This is fertile ground for refugee food projects – a different sort of Arab spring, perhaps” said Jörn Kabisch, a Berlin-based food and culture writer. He took a cooking class with a group called Über den Tellerrand (Beyond the Plate) whose mantra is to use “food as a means for cultural exchange”.

The group offers collaborative cooking sessions with “a strong focus on integration, getting to know the individual behind the term ‘refugee’ and facilitating sustainable friendships,” said Lotta Häfele, a project coordinator.

Kabisch added: “It was more like a get-together. Five refugees from all over the world doing their version of something with eggs: egg curry, Syrian shakshuka and so on.”

Berlin now hosts several refugee cooking projects. Anna Gyulai Gaal, a Hungarian journalist, hosts dinners for up to 10, cooked by Syrian refugee women in her small Neukölln apartment. Gaal started the dinners when she realised that refugee shelters didn’t have kitchens and that the women missed being able to cook. She is in the process of registering Refugee Dinners as a charity.