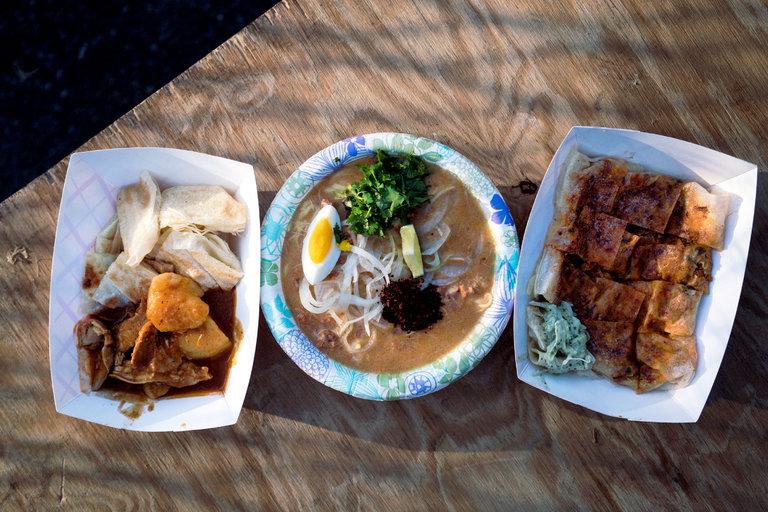 For nearly two decades, the only place to find Myo Lin Thway’s palata was the once-a-year Myanmar Baptist Church Fun Fair in Queens.

This is the story of Burmese food in New York City: a thwarted quest. Few restaurants here have ever fully dedicated themselves to the cuisine, and only one — Cafe Mingala on the Upper East Side — still stands. Stray Burmese dishes sometimes surface in Thai or Chinese restaurants, then disappear.

A post on Chowhound once reported the existence of a Burmese snack counter inside a grocery store in Sheepshead Bay, Brooklyn, but it closed before I could get there.

How lucky, then, that two summers ago Mr. Thway, who works by day in the diamond district, started branching out from church fund-raisers to street fairs, under the banner Burmese Bites. Until Aug. 20, he will be making palata every Saturday at the Queens International Night Market, in the parking lot behind the New York Hall of Science in Corona.

Palata is a furl of the tongue away from Indian paratha, but closer in texture to Malaysian roti canai. The way Mr. Thway learned to make it — from a trishaw driver in his hometown, Hinthada, on the Irrawaddy River in Myanmar — the dough is swung up and slapped down repeatedly until it can’t be stretched any thinner. He abstains from butter, touching the dough with just the oil needed to keep it from clinging to his hands.

If he had time, he would pull it into a long cord, wind it into a ball and punch it flat, to multiply the layers within. (In Burmese, its other name is htut thayar, or hundred layers.) But in Queens the crowds are closing in, so he simply folds the dough from four sides into a rough square before throwing it on the griddle.

It is enough. The palata is light, crispy and chewy at once; I carried one home by subway, and it arrived an hour later still soft and supple, without a hint of stiffening. It may come plain, for dipping into a dusky red chicken curry that leans toward India, Myanmar’s neighbor across the Bay of Bengal; or stuffed with minced chicken breast cooked in paprika oil and a masala that Mr. Thway imports from Myanmar, with the warmth of cumin pitched against cardamom’s faint menthol kiss.

His other specialty is ohno kaukswe, a soup that is distant kin to Thai kao soy. It is subtle and deep, the broth stained sunrise orange, given a nice murk of fish sauce and thickened with coconut milk and chickpea flour that is toasted until it yields a whiff of earth. Noodles curl under a crowd of cilantro, onion, hard-boiled egg, lime for squeezing and, if you permit (Mr. Thway always asks first), red-black chile, ready to swarm.

It’s hard to understand how all this can cost only $5.

The menu is likewise brief, cheap and possibly ephemeral at Burma Noodle Bar, an itinerant kitchen stationed through the summer at the Industry City Food Hall, part of a 35-acre work complex on the waterfront in Sunset Park, Brooklyn.