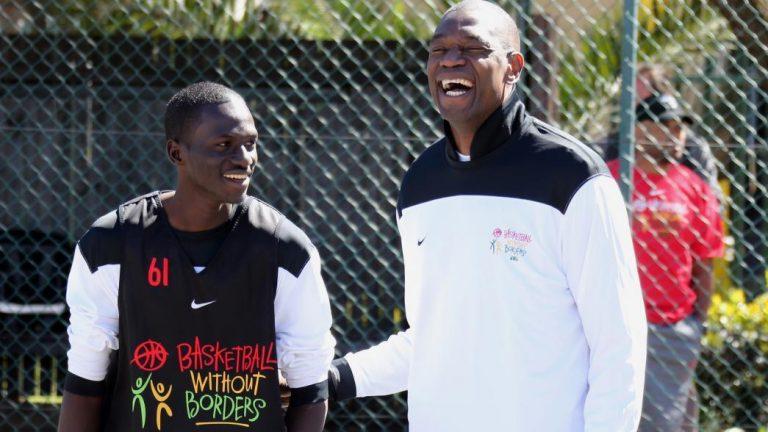 JOHANNESBURG, South Africa — Growing up in The Congo four decades ago, Dikembe Mutombo didn’t have Basketball Without Borders. He barely had a basketball.

The global development program hadn’t formed yet and somehow Mutombo found his way to the game and ultimately, the Basketball Hall of Fame, like Hakeem Olajuwon before him. Those two giants became popular in the States and yet somehow, back in their homeland, the sport still didn’t resonate thickly among kids or managed to divert their attention from soccer or cricket.

That’s partly the reason BWB was created, to raise basketball awareness in places around the world where the game could use an assist. The NBA (along with FIBA) has played a major role in funding and promoting BWB and Africa was, and is, the biggest test. Africa is the last frontier for the NBA; in relation to its large population, the number of NBA players born and raised on the continent is quite small. The athletic talent is abundant, yet there’s a serious lacking of infrastructure and proper coaching. So since 2001, summertime basketball academies run by BWB volunteers are tapping into a swelling number of curious kids.

This week, BWB is conducting daily clinics in Johannesburg for teenagers flown in from all over Africa, giving them a chance to be put through much-needed fundamental drills and get tips from dozens of NBA players and coaches. They’re also outfitted by Nike. And the capper is an exhibition game on Saturday with NBA players, only the second time that’s happened on African soil.

Standing on the front line of the mission is a familiar face who is giving the finger wag to anyone who says the game isn’t growing in Africa.

“Many didn’t believe us, or that this would happen,” said Mutombo. “And I have to admit, this is amazing, to see how this has grown. When I first became part of the program, we couldn’t get three NBA players to help out.”

Well, now there’s a line of players willing to sacrifice a week of their off-season to spend in Africa each year and especially to play in the Johannesburg exhibition, which began in 2015 and officials anticipate will be a once-every-other-year event.