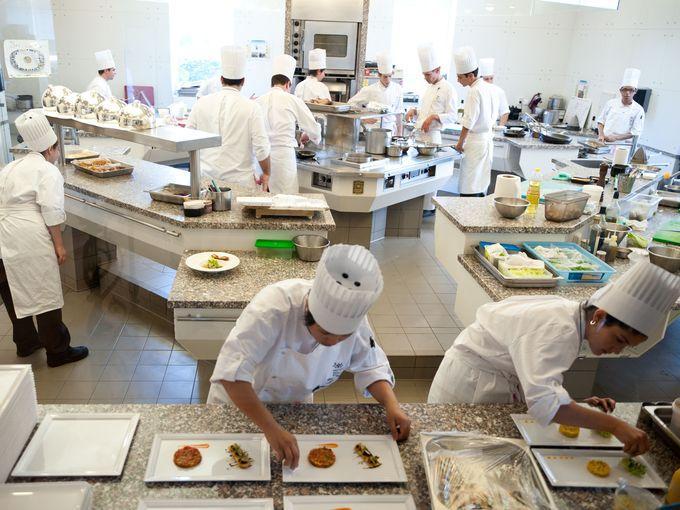 Want a fine dining experience that won’t break your travel budget? Consider going back to school.

The seven restaurants highlighted here are run by culinary schools, whose students make up much of their kitchen staff — an arrangement that allows chefs-in-training to hone their cooking chops in a real-world environment. For diners, that means a chance to sample creative, carefully-executed dishes grounded in the local culinary tradition — all at a reasonable price point.

And if you’re more interested in what’s happening on the other side of the dining room doors, you’re in luck: Most of these schools also offer short-term classes to cooks of varying skill levels.

Short-term class offerings from MIT’s culinary school are limited, though wannabe bakers or pasta makers can polish their technique in half-day seminars on desserts or pasta.

Located in Lima’s upper-crust La Molina district, Don Ignacio draws locals and travelers alike with its inventive interpretations of Peruvian classics, executed by culinary students from the nearby Universidad San Ignacio de Loyola. While the menu is always evolving, diners can anticipate dishes like a trio of tiraditos (a traditional seafood specialty akin to sashimi) and gnocchi in Huancaína sauce. Want to tip back some indigenous cocktails without breaking the bank? Don Ignacio’s frequent two-for-one happy hour specials mean skillfully-crafted pisco sours and chilcanos at cheap buzz prices.

While the Universidad San Ignacio de Loyola doesn’t offer short-term culinary classes, cooks with a serious passion for Peruvian cuisine (and a good handle on Spanish) can enroll in a nine-month Culinary Arts diploma course.

With Wylie Dufresne, Christina Tosi and David Chang among its alumni, it would seem that there’s no shortage of talent at the New York campus of the International Culinary Center. It’s no surprise then that L’Ecole, the ICC’s training restaurant, has racked up a number of prestigious accolades — the Michelin Bib Gourmand among them — for its seasonal, French-inclined fare. L’Ecole’s diners enjoy three- or four-course prix fixe menus (with optional wine pairings) featuring dishes like sunchoke chowder with bay scallops and pan-seared duck breast with winter vegetables.

Whether you’re in town for a flying visit or a lengthy stay, the ICC offers an impressive catalogue of courses for home cooks, ranging from one-day classes on highly-focused topics like New York bagels or Parisian baguettes to intensive, multi-week surveys of culinary technique.