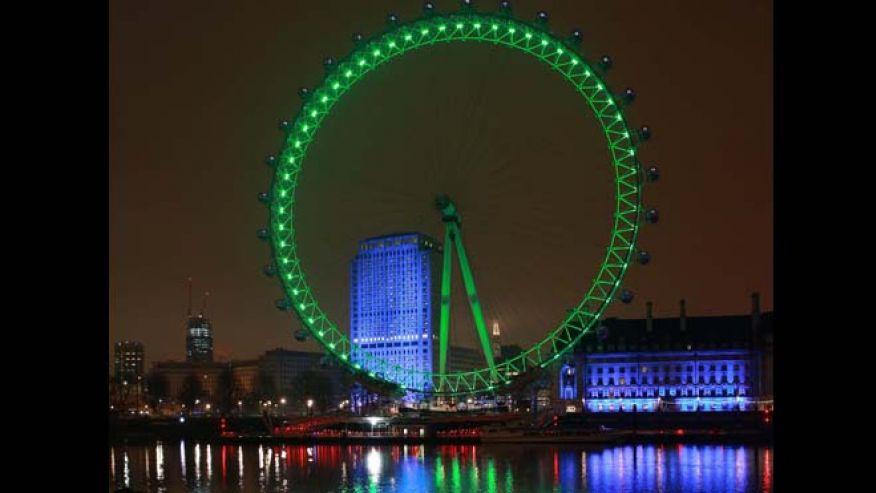 DUBLIN –  Landmark buildings across Ireland and the world have been floodlit green for St. Patrick’s Day as global celebrations of the Emerald Isle’s patron saint are culminating in parades and celebrations in Dublin, New York and scores of other cities Tuesday.

Hundreds of thousands of Dubliners and tourists lined the nearby route of the Dublin parade, the culmination of a four-day festival featuring music and dance performances, pub crawls, cultural tours and street arcades. Face-painted dancers, eccentrically themed floats and U.S. marching bands snaked their way down O’Connell Street across the River Liffey to St. Patrick’s Cathedral a mile (2 kilometers) away.

A man dressed as St. Patrick — but donning sunglasses and dispensing smart-aleck comments to the crowd, along with playful thumps from his club-like crozier — led the way.

At a barracks in Aldershot, England, Prince William and his pregnant wife, Kate, presented shamrocks to soldiers from the Irish Guards, one of the two Irish-recruited regiments in the British Army.

Kate, 33, handed out baskets of shamrocks and pinned a sprig on the collar of the regiment’s mascot, an Irish wolfhound called Domhnall. The 3-year-old dog was treated to a sip of Guinness at the ceremony’s end.

Home to more than 40 million citizens with Irish blood, St. Patrick’s Day is arguably a bigger event in some American cities than even in Ireland. But because this year’s holiday falls on a Tuesday, most U.S. towns and cities held their festivities early on the weekend.

Not so for the flagship parade down Fifth Avenue in New York, nor diplomatic events in Washington, where President Barack Obama and the Republican-led Congress take turns toasting their Irish guests at separate events.

Troublesome politics overshadow both events. In New York, a long-running argument over whether gay groups can openly parade means that for the second year in a row, Mayor Bill de Blasio won’t march. This year’s grand marshal is Catholic Cardinal Timothy Dalton, who supports the inclusion of one group representing gay employees of the broadcaster NBC, a major parade sponsor.

And in Washington, for the first time, the leaders of Northern Ireland’s power-sharing government aren’t coming. Obama encouraged them to stay in Belfast, where rival British Protestant and Irish Catholic leaders are negotiating to keep their 8-year-old coalition from unraveling over a bitter budget dispute.