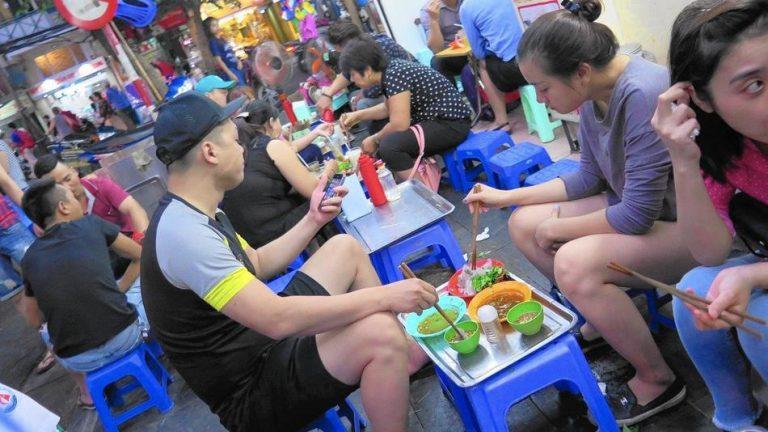 Hanoi teems with sidewalk life. Motorbikes beep as they zoom past, pushing you closer to the woman washing chickens on the sidewalk who’s crouched in front of a cafe packed with people drinking egg coffees or local beer.

It’s also a city where the crammed sidewalks will have you tripping over tiny blue chairs. The plastic seats are ubiquitous on streets where food is made on grills and carts and tops of buckets, just waiting for someone to plop down with a bowl of food from one of the myriad vendors.

For someone who would not self-describe as an adventurous eater, the prospect of street food was both exhilarating and frightening. That’s why we decided to start our trip with a guided street food tour, leaving it to an expert to pick the gastrointestinal-friendly places and explain the unfamiliar options.

If you want the full Hanoi experience, they also sell scooter tours. But after nearly being hit by these fast-moving motorized bikes on more than one occasion, we thought it wise not to imperil others (or ourselves) with our rookie driving.

The walking tour starts at the office at 74 Hang Bac St., where you can buy tickets. We recommend swinging by in person; we easily got tickets for that day, and going there ensured we were at the right place. In Hanoi, businesses sometimes copy another business’s name, like a hotel or restaurant, and set up shop. Unsuspecting tourists can end up at the copy cat place instead of the real deal.

Standing back on a corner from the wave of scooters, our guide, Teddy, started by asking about food allergies. She checked to see if we were comfortable sharing our eats. To help us survive the manic traffic, she’d yell “sticky rice” as a cue for us to wade in together to stay out of harm’s way.

We meandered to our first stop through an alley full of hanging lingerie for sale, typical for a city where shopping is organized by blocks with similar stock.

Arriving at Bun Cha Ta, Teddy explained that most restaurants are known by numbered addresses. Many are named solely by their dish — like bun cha, a pork and noodle dish — and locals remember that dish, and where to find it. In this case, locals would describe it as the place serving bun cha at 21 Nguyen Huu Huan St., as opposed to “Bun Cha Ta.”

Climbing winding stairs, we arrived at a small room on the upper floor, where we dined on soup filled with fragrant barbecued pork. Our guide explained how to eat it — add a chile or two, but “just leave it” for flavor, don’t eat it — and detailed the broth’s mix of vinegar, honey and water.

It didn’t take long for us to appreciate the challenge of a food tour with eight stops.

One thing missing from the night’s menu? The Vietnamese rice noodle soup pho, which, in our tour guide’s opinion, isn’t the city’s main delicacy.

“Tomorrow you can have pho, but not today,” she told us.

In Vietnam, eating is a process. Small bowls accompany each meal so that diners can perfect the taste to their liking.

It’s normal, Teddy said, to spend 10 minutes fiddling with add-on ingredients to get it exactly right.

Balance is key. Diners tweak their culinary concoction to get the ideal mix of sweet and sour, salty and spicy.

Next, we made our way to a place serving papaya and beef salad. A bit different from other papaya salads in the region, this one was light on spice and big on crunch thanks to the peanuts.

Not only did we get to learn about Vietnamese food and how to eat it; we also got to see how it’s made. At the next stop, a woman preparing a steamed rice pancake called banh cuon waited patiently as our guide explained the process. Then, in front of our disbelieving eyes, she picked up a bamboo stick to effortlessly create an ethereal sheet from the batter.

Some in our group attempted the same. None succeeded.

Walking to the tiny room behind her, we sat at a table to eat the finished product, dipping it in fish sauce and vinegar with individually added garlic.

Here is where stomach-space rationing began. After just three stops, we were all stuffed. And next on the list? A plate with four different fried foods, including the sweet doughnuts that vendors sell on the street.