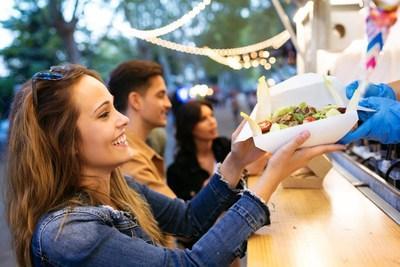 Canada is known for its diversity – of street food!

MONTREAL, Jan. 27, 2020 /CNW/ – Travel brings the senses alive! Wherever you travel in the world, one of the great pleasures is savouring the local specialties when you’re on a break from catching the local sights. Street food is affordable and tasty. Whether it’s at a food cart, a stall in a market or a tiny restaurant with a few tables and stools, it feels good to enjoy the same quick pleasures as the local population amid the hustle and bustle, day or night. Let FlightHub take you on a tour of Canada’s best Canadian street food!

One of the world’s younger countries, Canada hasn’t had a long history to create a significantly distinctive cuisine, but it does dominate in one domain. As the Canadian flag boasts, the country produces ninety percent of the world’s maple syrup. This locally sourced ingredient elevates plenty of well-known dishes adapted the Canadian way.

When you’re looking for an authentic street food experience on your travels in Canada, you’ll want to discover created-in-Canada comforts like Quebec’s poutine or Halifax’s donair to tickle your taste buds. Plus, you get to taste what’s best about experiencing Canada – its cultural diversity. Each province or territory in the world’s second largest country boasts a unique mix of immigrant cultures whose cuisines have been locally adopted.

What’s more, eating on the street is bigger than ever, as Canadian cities have recently embraced the food truck phenomenon. City councils ensure that licenses are given out to a representative diversity of cuisines. When you find a cluster of food trucks on the street or at a festival, you’ll not only have a selection of the trendy grilled cheese sandwiches and pulled pork creations native to any gentrifying neighbourhood, you’ll also get to sample the diversity of the immigrant cuisines of the area.

Hold the Atlantic provinces in your hand

When passing through Canada’s Maritime cities and towns, expect to snack on the bounty of the sea, which is best expressed in lobster rolls. They’re easy to find wherever you travel in Nova Scotia, New Brunswick and Newfoundland, and they come in a wide variety. Talk to the locals to find which rolls are their favourite!

If you’re driving the beautiful Gaspé peninsula in Quebec, you’ll want to stop at a “cantine” and practice your French. A lobster roll in Quebec is called a “guedille au homard”.

If you visit Halifax, you must try the city’s official food: the donair. Based on another well-known street treat, the Greek pita-wrapped gyro, the donair was invented in the 1970s when a creative cook replaced traditional tzatziki with a sweeter sauce. Donair sauce is made with sweetened condensed milk, vinegar and garlic powder. You’ll find donairs not only in donair shops, but also in the local pizza joints, where the sauce may also be used on other creations as well.

In the predominantly French-speaking province of Quebec, you’ll encounter the hearty poutine wherever you go. In its basic fill-you-up form, it’s made with french fries and squeaky cheese curds then smothered in gravy. If you want to push your poutine to another level, order yours topped with Montreal’s famous smoked meat. The ultimate in comfort food, you’ll find yourself walking the streets a little slower afterward.