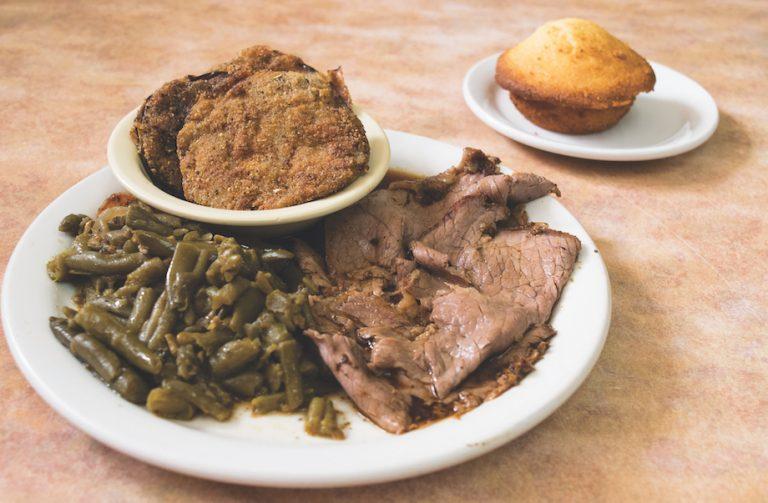 Would you jet to Miami for a Cuban hamburger? Take a trip to Savannah for foie gras and grits? How about head to Asheville for a whole-hog pulled-pork plate? Some dishes are so remarkable, they’re worth traveling that extra mile—or even hundreds of miles. To create this list of crave-worthy plates, we polled more than a dozen Southern food experts (and one well-traveled Yankee), then took to the road on a pilgrimage to the region’s culinary capitals in search of dishes we’d happily plan a vacation around. Forget traveling light. We prefer traveling full.

Opened by Jack and Rose Arnold in 1982, this cafeteria-style, weekdays-only lunch spot in a bright-red cinderblock building is hallowed ground for lovers of classic country cooking. Locals know which days to go for fried chicken and battered grouper (Mondays and Tuesdays, respectively); travelers may plan ahead by checking out the online menu. Turnip greens, mac and cheese, pinto beans, fried apples, candied yams, boiled cabbage, stewed okra, fried green tomatoes: How in the world can you pick just three sides? Chris Chamberlain, food and drink writer for Nashville Scene, is a devotee of the “absolutely exemplary” fried chicken. As for sides, he’s big on the turnips and likes to layer the creamed corn over the green beans, as suggested to him by Jack and Rose’s son, Kahlil, who now runs Arnold’s. Erin Byers Murray, editor-at-large for Nashville Lifestyles and author of Grits: A Cultural & Culinary Journey Through the South, raves about the roast beef. “It’s sliced super thin and piled onto the plate in a tangle of juicy slivers,” she says. “I’m not sure what goes into their seasoning, but it’s damn near addictive.” In 2009, the mom-and-pop was named an America’s Classic by the James Beard Foundation. No wonder country-music industry types, construction workers, and politicos all congregate here.

Where to Stay
404 Hotel | Sleek, sexy, and super private, this hotel has exactly four rooms and zero registration counters (check-in takes place via room code). Enjoy posh amenities (Sferra linens, Malin + Goetz toiletries, Turkish towels and robes) and, at the hotel’s 404 Kitchen, one of the smartest and largest whiskey collections in the state.

One More Bite
Hot chicken at Prince’s | Though it has many imitators, Prince’s lays claim to the original mouth-torching Nashville bird. Try the hot or “XHot” breast-wing quarter and a cooling side of potato salad or coleslaw. Anything hotter, have the fire department on speed dial.

Burn It Off
Natchez Trace Parkway | The famed 444-mile trail begins in Nashville, near the Loveless Cafe. Grab a biscuit and a bike, available at Trace Bikes, and ride to your heart’s content.

Another Meat-and-Three to Try
Veggie plate at Bully’s Restaurant, Jackson | At this beloved soul-food cafe run by Tyrone Bully and his family since 1982, skip the meat and build a plate of four incredible sides. This restaurant, another James Beard Foundation American Classic, cooks three different kinds of Southern greens every day. Don’t miss the collards or the mac and cheese, and save room for blackberry cobbler. 601-362-0484

When the freshly refurbished French Quarter grande dame flung open its doors four years ago, its updated amandine was an instant hit. Forget the old-school pan-fried fish saturated in brown butter and strewn with grocery store–quality sliced almonds—that was the preferred dish of pearl-clutching grands-mères of yesteryear. In this opulent dining room of tufted green leather, shiny pink upholstery, and flaming bananas Foster, Brennan’s new amandine exudes modern flair. A stellar slab of Gulf fish (depending on availability, it might be pompano, sheepshead, redfish, or speckled trout) lies in a foamy bath of rich cream, with a cassoulet of blanched haricots verts, tender Kennebec potatoes, and Marcona almonds on the side. If the fish is the diva, the sauce is the choir: a haunting amalgamation of cream and brown butter, with hints of preserved and fresh lemon and a touch of thyme. No wonder longtime New Orleans restaurant critic Brett Anderson and Los Angeles Times restaurant critic Bill Addison have singled out the amandine as an essential Big Easy plate. In a city awash with fabulous destination restaurants, Brennan’s remains an unsinkable showboat.

Where to Stay
International House | With its wrought-iron chandeliers, stunning contemporary art, and terrific cocktail bar, this boutique hotel is a delight. It’s only two blocks from the raucous French Quarter, but so quiet you might never know.

One More Bite
Goat curry at Compere Lapin | Chef Nina Compton (who was named the South’s best chef in 2017 by the James Beard Foundation) pays tribute to her Caribbean roots at this Warehouse District stunner. Try the goat curry with sweet potato gnocchi, paired with jerk butternut squash. When celebrity chef and double James Beard winner Alon Shaya is not at his Magazine Street restaurant, Saba, you might spot him here.

Burn It Off
The Warehouse District | Explore this snappy neighborhood on foot or via the Blue Bikes share program. It’s home to small galleries (Arthur Roger, Jonathan Ferrara), big museums (The Ogden, The National World War II Museum), and some of the city’s most dependable restaurants (Peche, Herbsaint, Meril).

Another Seafood Dish to Try
Fried shrimp at Doc’s Seafood, Orange Beach, Alabama | You might roll your eyes when you see the braggadocious sign in front of this seafood shack: “Best Fried Shrimp in the Entire Civilized World.” All cynicism will vanish when you dig into a pile of impossibly fresh, delicately breaded shrimp. The local crustaceans might be petite, but they are big in sweet-briny flavor. The plate comes with hush puppies and a baked potato or fries.