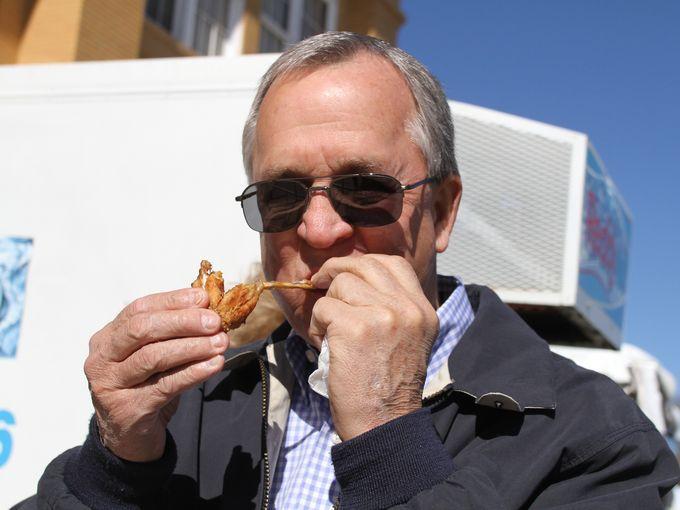 by Sarah Maiellano, Special for USA TODAY | Published on February 18, 2015

Beer and wine tasting events, barbecue competitions and chili cookoffs are always solid choices for a tasty excursion. But some food festivals are more likely to make you scratch your head than make your mouth water. Many of these festivals celebrate the foods that put their town on the map. Others exist to raise awareness of a particular delicacy — sautéed cricket, anyone? From Sauerkraut Weekend to Spam Jam, you could spend a year following strange food around the country.

Fellsmere, Fla. – which calls itself the Frog Leg Capital of the World – holds the Guinness World Record for the most frog legs served in the course of one business day. The festival serves over 7,000 pounds of the delicacy to over 80,000 attendees each January. Choose between the Frog Leg Dinner which comes with grits, coleslaw and hushpuppies, or a leg on a stick called a Frog Pop. froglegfestival.com

With the tagline “24 years of turning bulls into steers,” the Calf Fry Festival isn’t for the faint of heart. Calf Fries are bull or calf testicles that are peeled, sliced, breaded and deep-fried. Ranchers, who have been eating this stuff for centuries, don’t consider this strange at all – neither do the 30,000 people who eat over 3,000 pounds of Calf Fries every spring at the festival. The weekend includes a three-day concert at the legendary Tumbleweed Dancehall, where Garth Brooks was once a bouncer. tumbleweedok.com

Hawaii’s love affair with Spam can be traced back to when it was served to World War II soldiers stationed on the island. The tradition lives on at the Spam Jam where local chefs get creative with the luncheon meat. Think Spam tacos, pizza, cheesesteaks and ramen. Desserts too: Spam flan, crème brûlée and, of course, ice cream. Free admission is icing on the (Spam) cake. spamjamhawaii.com

Since they are farmed for human consumption, crickets are the most popular insect cooked at the Bug Eating Festival. But that’s not all that curious and courageous eaters will find. Past events have served ants, wasps, wasp larva, grasshoppers, katydids, walking sticks, hissing roaches and scorpions – typically sautéed with butter, barbecue sauce or soy sauce. Organizers suggest that liquid courage may help – attendees are welcome to bring cans of beer. littleherds.org

RELATED: Get the buzz on bug-based cuisine

For the last 45 years, the town of Phelps in upstate New York has celebrated its one-time status as sauerkraut capital of the world with a weekend dedicated to the condiment. In addition to plenty to eat, Sauerkraut Weekend features cabbage bowling, a cabbage head decorating contest, and a sauerkraut cake which is ceremoniously cut by the Festival Prince and Princess. phelpsny.com/sauerkraut-weekend

Bring plenty of breath mints to the Gilroy Garlic Festival, where 2,000 tons of fresh garlic are served each July. Top area chefs also compete to wow the event’s 100,000 attendees with garlicky dishes. Don’t miss the free garlic ice cream that is a highlight of the event. gilroygarlicfestival.com

How does a slice of green bean pizza sound? Don’t knock it till you try it at Georgia’s Green Bean Festival. The event features a canning plant tour, photo opportunities with festival mascot Mr. Green Bean and a green bean pizza eating contest. Area produce vendors are on hand with several green bean varieties to try. greenbeanfestival.com

Over one million pounds of Goetta – a German breakfast sausage pronounced “get-uh” – are produced annually in the Cincinnati area. Since 99% is consumed locally, chances are you’ll have to come to Cincinnati to try it. That’s where Goettafest comes in. Try it in nachos, gyros, gumbo, chili, pizza and, for the bravest among you, sushi and fudge brownies. Activities, such as the Goetta Ring Toss, stick with the theme. goettafest.com